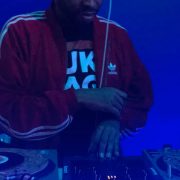 Dirty MF, a Grammy-nominated freestyle MC and DJ, is a Hip-Hop pioneer with a 30-year career and is by all accounts a Chicago legend. He got his start back in the 90’s as the MC for the Blue Groove Lounge (one of the first Hip-Hop nights in Chicago). He went on to be the frontman of the acid-jazz group Liquid Soul (appearing on their Grammy-nominated album Here’s the Deal), later starting his own all-improvisational funk Hip-Hop act called The Smoking Sextion. Mostly known as one of the premier freestyle rappers in Hip-Hop, Dirty has spent the past decade focusing on DJing and developing the vinyl-inspired brand Vintage Vibes.